What would you do if money was no object?


I don’t talk to anyone much anymore, I communicate almost always through email and social media.  I don’t think less than I did before.  I enjoy the social media, but some ideas are larger than 140 characters.

My son, who I talk to the least of anyone close to me, recently posted a video narrated by Alan Watts.  He asks, “What would you do if money was no object” – meaning it was not the main driving force behind your career choice.

…if you hate this job
And the people...
And the fact that you have to come in
on your day off, why don't you quit?

There's other jobs.
They pay better money.
You're bound to be qualified
For at least one of 'em.
So what's stoppin' you?

So no matter what job you take if you do hate it, unless you work for a pimp or family you will change your situation.

Alan’s proposal doesn’t make much sense. In as much as you may think you really would like to be a painter, poet, musician or teaching at a riding school.  You are doing this full time now?  You may take something you love, and turn it into something you have to do and it may lose some of its appeal.  And just like sitting around the house, eating Twinkies, and watching Wrestle Mania reruns, my observation is that no one enjoys doing that full time for more than a couple of weeks.

I’ve had the pleasure of knowing lots of people over the years for whom making money was not an issue. But that really brings to the forefront the question “What would you do if you didn’t have to worry about money?” Those people don’t have the easy out that “I only work because I have to.”

Now when my kids lived with me it was actually a whole lot easier to just barely squeak by week after week – having no extra time and certainly no extra money. In that situation I didn’t deal with the important questions of life; I was doing what I had to do.  A life insurance agent came over to my house and asked me, “what if you die?”

As Abraham Maslow would say our physiological and security needs are met.  Money is not the driving force, confronted with having more time and money than ever needed; a person has to really decide, “How am I going to invest my time – and money?” "How can I make the world a better place?" “How am I going to make my life matter?”

Do we need our job to dictate that?  In economics it is referred to as the economic advantage. A job that allows you the time and money to do what you want may be a better outlet than working at something you love, and turn it into something you have to do.  Van Gogh wanted to be a pastor, yet he ended up as a painter.  If he would have retained his painting/teaching gig and did some pastoral work on the side would he have still taken his life when he was 30?

My point being that I don’t have to be a painter to paint.  If painting is my outlet I may work as an accountant and paint with a fervor.  If you are looking for a job to satisfy your needs here are some statistics coming out of our changing workplace today:
We are rapidly approaching the end of 2012. This is the time to be planning what you want 2013 to bring. If you wish to be a poet, painter or working with horses by all means do, but don’t let your job define who you are.

What that car really costs 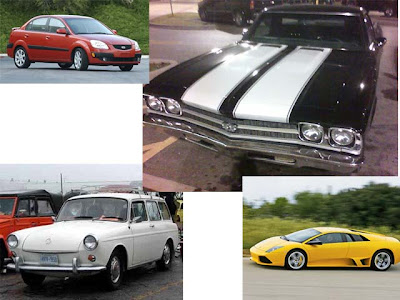 If you think what you drive defines you as a person, you can stop reading now. I have worked in auto finance for over a decade and have seen many consumers make bad car choices that cost them in the long run. Knowing the true vehicle's cost can save you thousands.

I thought about it when I bought my 1968 Chevrolet Hel Camino for $6500 at the same time I could have bought a 5 year old Kia Rio that still had the balance of it’s 100k warranty, a/c and 40 mpg. Obviously the Kia was a better deal. There are days that I’m covered with grease, or having a mysterious backfire that I curse my decision, but as Vida said in To Wong Foo, “Well Pumpkins, it looks like it comes down to that age-old decision: style or substance?”

We hear, “A less-expensive car can cost you more in the long run than a more-expensive alternative”, the biggest factor is depreciation. So what would happen if we bought a car that didn’t depreciate?

We are going to only cover cars that the resale is negligible and only cover other costs like fuel, interest, insurance, sales tax, maintenance and repairs.

In analyzing ownership cost I made some notable discoveries:

• One of my friends went to the Toyota dealership for his "free" oil change. According to the service desk, a 6 year old minivan with 40k miles needs a Fuel System Flush, Transmission Flush, New Timing Belt and New Water Pump. All for only $1,100. A trusted mechanic is going to be invaluable for controlling automobile expense.

• Don’t purchase a car to try to save on expense, but if you are replacing a car a more efficient model may save you over a lower priced model.

My cost of ownership:

Purchase price. I don’t want a car payment. I bought both my cars with a combination of available cash and low interest rate credit cards.

Interest although I minimize the interest I pay on a vehicle, new cars often offer below market rates although used cars will not have that advantage.

Maintenance and repair costs make up 4 percent of ownership costs over five years on newer vehicles. My hypothesis is my maintenance will be much higher.

Insurance costs vary depending on many factors, age, address, type of car, credit and/or driving record. I have liability on one of my vehicles and full coverage on the other.

Sales tax in Texas is paid on at least 80 percent of the state-determined value, even if you pay less for the vehicle. State sales tax on used cars is 6.25 percent. Neither of my cars have any value per Texas.

Next Car ~ Hel Camino
Posted by Goon III at 8:08 PM No comments: